The drive in to Kotor Montenegro was unlike anything we had ever seen. An absolutely gorgeous country covered in picturesque mountains that plunge into the blue waters of the Bay of Kotor below. The stark contrast between the two terrains made for some unforgettable views!

Upon arrival, we were informed that our apartment had been upgraded from a one bedroom on the first floor to a two bedroom, two bathroom space on the third floor! This place was enormous. A large living room, kitchen, and office, two bedrooms with big comfortable beds, two full bathrooms, and the pièce de résistance, a big deck overlooking Old Town Kotor and the Bay!

Overlooking the Bay of Kotor from our upgraded apartment! Hell of an upgrade!

The woman who checked us in pointed out that there was a small market and restaurant less than a block away — and we were running low on supplies — so after we got settled we headed downstairs. The sidewalk at the rear of the complex was bordered by a concrete wall that was ~7 feet tall. We thought nothing of it until an adorable Husky dog poked his head over the top to say hello! We would become fast friends during our stay in Montenegro. 🙂

The neighbor was a little Husky!

After several minutes spent with the dog we continued walking.

The market was quite small, but allowed us to pick up the essentials (we would later drive to a larger market to do some proper shopping). It’s always fun to walk through stores in other countries to see what kind of goodies you can unearth. One item stuck out, looking regal on the shelf among its competitors!

We picked up what we needed and made our way back to the apartment to decompress after a long drive. We opened a bottle of wine and put a movie on the oversized television while we planned out our stay in beautiful Kotor, Montenegro!

Later that night we walked to the Relax Caffe, convenient in it’s proximity to our apartment, inconvenient in the amount of cigarette smoke polluting it’s air! Alas, we needed to soak up the wine we polished off and this was our best option. We sat at the bar and ordered food and beers.

The food was good and the servings were huge (big plates and big beers)! There was an extremely drunk Montenegrin sitting at the bar a few seats down who ordered two more beers each for Laura and I. He kept asking the bartender to play Madonna as he conveyed his love for her in the little English that he spoke. It was great!

For dinner, Laura ordered pork and was presented with a massive plate of the most delicious pork belly either of us had ever eaten! It was like a giant, two inch thick slab of bacon-flavored goodness. So tasty! She somehow had a few bites of pork chop left on her plate when she was done, so we wrapped them in a napkin and fed our friend the Husky on our walk back to the apartment.

Neither of us slept well, and the next day we were feeling the effects of the alcohol and second-hand smoke, so we took it easy most of the day hydrating in the apartment and enjoying the view.

The next morning we walked through the town wall and in to Old Town Kotor. It was a beautiful town built mostly of stone and happy to show off all it’s old world charm.

So Much Charm in Old Town Kotor Montenegro!

Our goal for the day was to hike up to the Fortress built in the side of the mountain. It took us a while to figure out how to get up there, but eventually we found the entrance and started the trek.

The views became more and more beautiful as we climbed higher up the mountain, and we stopped often to take photos.

Heading to the Fortress.

Higher and higher we go.

The Bay of Kotor from up high. Boats lined up, eagerly awaiting that warmer weather.

As we approached the top of the Fortress, the foundation got a little sketchy. There was a rickety bridge we had to cross that led to a stone building that was crumbling to pieces and looked completely unsafe. CAUTION RISK ZONE! We stepped lightly and took our time, eventually deciding it was unsafe to go any higher, so we stopped where we were.

We’re not certain if where we were was considered The Fortress, but it felt pretty Fortressy to us and there was a flag planted, so we think we made it! Great success!

Atop the Fortress in Kotor, Montenegro!

After a while at the top, we walked back down and grabbed lunch in Old Town before making our way back to the apartment. All-in-all it was a fantastic day spent in Kotor! During the night they light up the Fortress and it looks pretty neat!

The Fortress lit up at night.

I hope that one day we’ll be able to visit Montenegro in the summer (a recurring theme of our visits, it seems). It would be a shame if we never return to such a beautiful country! 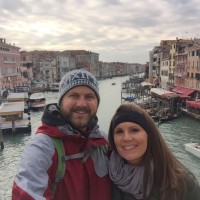